Home Norah Jones - 'Til we meet again
Back to overviewBack

Norah Jones - 'Til we meet again 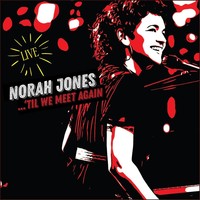 Norah Jones - 'Til we meet again

Norah Jones
The full name of Norah Jones, who was born in New York on March 30, 1979, is Geetali Norah Jones Shankar, Daughter of Ravi Shankar and Sue Jones. She inherits her Indian roots from her father. Norah grew up with her mother in Dallas Texas. Norah is heavily influenced by Bill Evans and Billie Holiday.
Jones started singing in church choirs at the age of five but also felt that she should learn to play the piano. Jones has been under contract with Blue Note Records since 2001.

Til we meet again
After her breakthrough in 2002 with Come away with me, this singer with the recognizable voice has sold approximately 50 million albums. This is her first Live LP with 14 songs from her repertoire recorded during 9 concerts. From Italy, Argentina, USA to France. The LP exudes the live performance well. The different locations did not lead to too big differences in stage, sound and feeling.

Rating
Great live recording. Some songs are just a bit more intrusive because of the recording location. Sufficient detailing and internship. All in all a must-have for the fans of Norah.